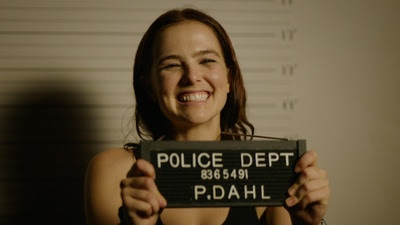 It seems that every year at Tribeca Film Festival, Zoey Deutch is in a new movie, this year was no different. I really like her, and so I wanted to see her latest film, Buffaloed.

Buffaloed takes places in, not surprisingly, Buffalo, NY. The story of Peg, a girl who even at a young age was giving lectures to her mom, and saying she wanted to eat real food, not just chicken wings.

She begins hustling in high school by selling cigarettes, for $1 a piece. She then gets into the college of her dreams, but soon realizes she won't be able to afford it, and so she makes counterfeit tickets for the Buffalo Bills to try to save money, until she gets arrested.

Out of jail, she is bombarded by phone calls from collection agencies (from her legal bills). Short story; she winds up going to the collection agency, getting a job, and requesting that if she gets the most sales, they'll drop her debt. The head of the agency is a tough guy, who wouldn't think twice about cracking someone's skull. In the meantime, she starts spending time with the lawyer who put her in jail to begin with. A lawyer who doesn't think too highly of these agencies.

Buffaloed shows the reality of debt collection, and makes you think of the sad reality that so many people in our society have to deal with these horrible organizations. Peg is a badass, and she's smart too. She's someone who gives zero f****. Loved Zoey Deutch in this role. This movie is funny, and a bit of a drama too. I found it really enjoyable.

One of my favorites of the festival.
Posted by Steve Kopian at May 09, 2019