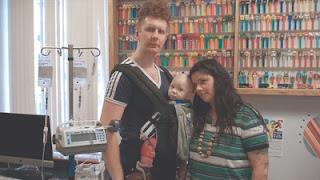 WALDO ON WEED is the story of 6 month old Waldo Dwyer who was diagnosed as having cancer of the eye. Desperate to find something to help their child, the chemo made Waldo violently ill, his parents were directed toward the use of medical marijuana in oil form. It seemed that the oil was helping other kids and controlling if not eliminating similar cancers. The trouble is that at the time Waldo was diagnosed his parents couldn’t legally get the oil in Pennsylvania and so they had to travel to California to get it. The film is made up of footage shot by the family recording their saga well as the current interviews.

Good look at how important the use of marijuana is for some diseases. As the film clearly shows the herb has much to give to us beyond making us high. And it should be pointed out that the chemical distilled in the oil will not get you high. This is something that people who think that the use means everyone is going to be lighting up needs to understand.

As important as the film is, I think it could stand to be a little tighter. I know the film only runs 85 minutes but some of family sequences could be trimmed. Also some of gushing over weeds medicinal uses could be toned down since it’s a bit over kill at times.

Full disclosure – Please be aware that my reaction to the film, and its use of home video footage, was influenced by seeing at least three films at Tribeca which were made up of home video footage. I absolutely did mental comparisons between all the films. When watching all but the first.

Regardless of my reservations  WALDO ON WEED is a must see for anyone pondering the pros and cons of marijuana.
Posted by Steve Kopian at May 12, 2019