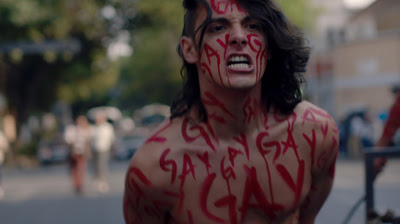 More proof that films seeking to be provocative are almost always doomed to fail.

The story of a high school kid who ends up running with some artists in a gay bar is full of sex drugs, (excellent) rock and roll and lots of male nudity. It is also emotionally empty and not much of anything.

Any film where the best drawn characters are the secondary ones is in trouble. While Charly is the focus there isn't much to him. He smokes and drinks and watches but not much else. Yes he finally gets laid (in one of the most hysterically funny sex scenes I've ever seen- clearly the actress didn't want to do it) after lusting after several women but there is nothing here to grab on to. What are we supposed to be getting out of this? Find you're own path? Yes and...?

A big part of the problem is this isn't a flowing narrative but a series of scenes. Things don't connect up enough to create characters. Other than the uncle there is zero sense of anyone having a life outside of the moment. The result the people on screen are cut outs not real people. Why should we care when we really don't know them?

As for all of the provocation it's emptiness since it never feels organic to the situations rather its in there just to rattle the cage so as a result it is less than thrilling.

While never completely bad, it is a huge disappointment because this could have been something.

Recommended for the music alone
Posted by Steve Kopian at May 11, 2019