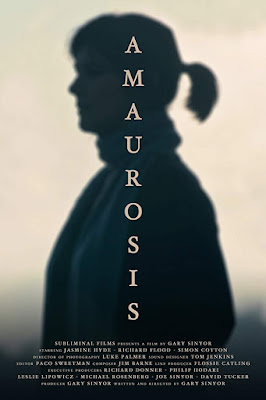 The events of AMAUROSIS are set in motion when Gemma (Jasmine Hyde) and Will‘s (Richard Flood) son dies accidentally. The couple is wrecked as a result. Gemma in particular carries a sense of guilt about what happened. As a result of the guilt Gemma’s eye sight begins to fail (she develops the condition that gives the film its title). She can see light but everything is blurry. When it happens for the first time Gemma is taken to the hospital by (Paul (Richard Cotton) a concerned passerby. As the couple begins to sort out the sudden blindness Paul becomes a friend. In the hope of helping the couple he invites the couple to his country house. However Will can’t stay and Gemma is left with Paul and things begin to shift.

A mix of heavy domestic drama and thriller the film is a solid little gem. While the film doesn’t always mix the thriller and the drama perfectly (this probably would have been better as just a look at the loss of a child) the film still manages to be something special thanks to a killer cast who give us beautifully rounded characters that we care about.

One of the joys of the film is writer/ director Gary Sinyor‘s compositions. The look of so much of the film is just fantastic. A scene will start, say the first one after the accident, and with the very first image we know everything that led up to that moment. The arrangement of the actors, their dress, their demeanor and everything in the image fills in volumes without a word. I think great deal of the emotional flow of the story is revealed just by the images and sounds other than the words. It is a towering achievement that few directors ever achieve.

AMAUROSIS was and is an unexpected delight. I absolutely love when a film like this falls in my lap and I get to share a hidden little treasure. Currently available on Amazon, AMAUROSIS is worth a look. While I will not guarantee that you will think it’s the greatest thing since slice bread I absolutely think that you will find it wonderfully atypical and a perfect cure for the mass produced nonsense of Hollywood.
Posted by Steve Kopian at May 25, 2019