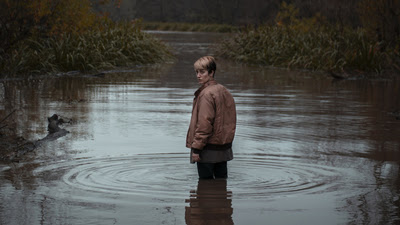 Great looking film never manages to be much of anything as a young woman  who is addicted pills and booze returns home when she receives word that something has happened to her mother. Racing home she finds her father praying over the corpse of her mother...except it's not her mother since she had died several years earlier.

Odd drama is hampered by a plot that meanders all over the place (why do we need the sheriff who is a pervert?), is a bit wobbly about it's themes and a lead performance that would give Buster Keaton a run as to who has the most immobile stone face. While I like what it is trying to do, and the film kept me interested, it never hangs together. Worse there is a point where you suddenly realize that any drama is going to be minimal, even with the possibility that the characters can raise the dead.

To be honest while never bad, LOST BAYOU  never excites and as a result it ends up being just meh.
Posted by Steve Kopian at May 03, 2019