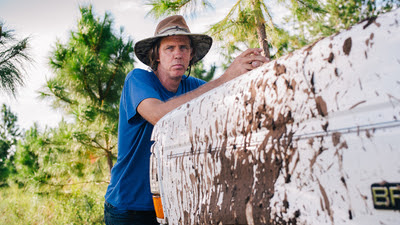 Nominally a portrait of Orlando resident Matthew “Video Pat” Burns who lives for mudding, the driving of ATV's and monster trucks through the mud, the film is more a window on the people who are fans of the sport.

We follow Burns, his children and friends as they spend time at the local mud hole where they drive their trucks around for fun. It is a loose association of friends who have been coming together for decades. This is opposed to the Redneck Yacht Club which is a larger more organized event where the young folk behave badly. When a brush fire burns down the hole, Burns is left to wander around as life goes on a around him.

Certain to terrify those on the far right and far left with the portrait of the low income people good ole boys and girls drawn to the sport as back woods, ignorant racists who love Donald Trump. The Left will hate it because they will see everything they fear in the stereotypical southern Right Wing Conservative and the Right will hate that it is going to reinforce the stereotype of the supporters of Donald Trump as being stupid people who don't know better.

Frankly no matter where you stand it's uncomfortable portrait where no one comes off looking good. As sweet as everyone is you still want to smack some sense into everyone. Clearly this is life as lived and I'm not sure we are better for it.

To be completely honest I don't know what I think of the film. Yes, it's a chilling portrait of America under Trump but at the same time I don't know what the point of this is? Are you simply trying to show us one man's life or is there something more? I'm not wholly certain. I'm uncertain because I'm not certain what am I supposed to feel for Burns and the people in the film? Are we supposed to like him or pity him? I don't know. I know I feel horribly sad for him.

This is certainly an eye opening and terribly sad film about people who are happy where they are and uncertain about the future which seems intent on pushing them aside despite the belief that if President Trump was just allowed to do what he wants and the Liberal Left got out of the way it will all be okay.

I am profoundly saddened by the film and I fear for our country more than ever.
Posted by Steve Kopian at May 09, 2019