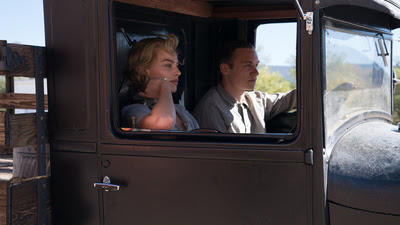 As the director, Miles Joris-Peyrafitte said after the screening of Dreamland that I went to, Dreamland is "Bonnie and Clyde meets Stand By Me". I liked that.

Dreamland is set in the 1930's in Texas. A bank robber named Allison, and played by Margot Robbie, has left 5 people dead, including a small child. There's a reward of $10,000 out if anyone finds her. Eugene, played by Finn Cole, and his friend want to try to find her. They think of what they could do if they had that money. One night, after Eugene is supposed to be asleep, he goes into the barn, to find Allison, wounded from a bullet in her leg. She swears she didn't kill anyone, and he takes the bullet out from her leg.

Is she manipulating him, or is she being honest? Does he turn her in, or do her good looks reel him in?

I don't want to give anything away, but I really enjoyed this film. I'm not into Westerns, but didn't feel that this was your typical Western film. It's only 98 minutes, and it goes by quickly. It's both a drama, and a coming of age story. It's nice that both stars are very easy on the eyes too.

Highly recommended.
Posted by Steve Kopian at May 12, 2019