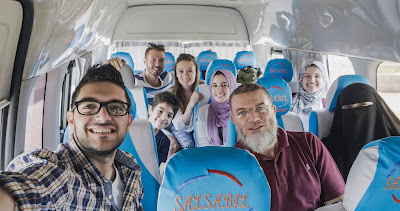 Full confession: I agreed to review FREE TRIP TO EYGPT because I thought it was going to be easy. One of any number inde docs sent my way which are good but nothing special. I figured it would be an easy film to handle in the wake of a heavy Tribeca schedule…and then I saw the film and found it wasn’t easy…in a good way.

FREE TRIP... is the story of Canadian/Egyptian entrepreneur Tarek Mounib who realized that the way to change minds and the world was to open a dialog. If we can get people to talk to each other about their realities, views and fears we can build bridges. To that end he would go to America, find some people, mostly right leaning MAGA types, who are either anti-Islam or don’t know anything about the religion, but who are open minded enough to be willing to find out and take them to Egypt and show them what they “fear”. The film crew would film what happens and there would be a film.

Low key unexpected joy is a must see. On some level the film does what you expect it to, which is show how real and meaningful dialog can and will change minds for the better, but at the same time hanging out with everyone and watching the change happen results in a rare form of movie magic. No strike that- real magic because these are real people and what happens to them really happened. Trust me this film will sneak up on you and then jump you with an emotional punch. It did that to me, with an ending section which was completely unexpected.

To be honest this is not a film you should be reading about, rather it is one you should just experience. I say that not because I don’t want to write on the film, but rather that what I will say will not match the experience of seeing it. I went in thinking it was going to be one thing but it wasn’t that. Well it was, but the experience of seeing it wasn’t what I expected. There was more going on than I expected, which made me happy at the complexity, but saddened me because I went in with such a half-assed attitude that I had to go back and give the first twenty minutes a second go.

Highly recommended, A FREE TRIP TO EGYPT plays New York for a week starting Friday May 31. It will play in Los Angeles on June 7th and then will screen in 500 theaters on June 12th as part of a Fathom Event
Posted by Steve Kopian at May 29, 2019