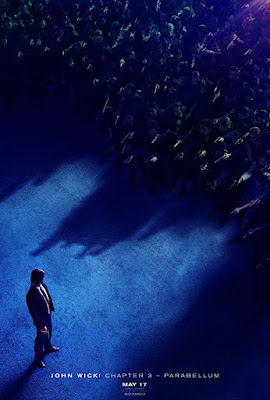 The first thing you need to know is that if you haven't seen the first two films don't see this film until you do. It begins with John on the run after the events of the last film and just goes with no hint of explanation of the world or its rules so you will be hopelessly lost.

The second thing you need to know is that the the Parabellum of the title is the name of an automatic weapon whose name is formed by the Latin words for Prepare For War (As in the If you want peace, Prepare for war). I mention this because the film sets up a sequel, a bigger badder and an oh my god how are they going to top what just happened sequel...not that you couldn't have guessed that, but I just wanted to state the obvious.

As I said the film begins right where the previous film left off and just goes for two hours plus. Lots of people die and we get hints of the larger world of not only the assassins but of Wick as well. The film is essentially a series of set pieces that manage to build character and move the plot, something that other action films usually fail to do.

The film is not without it's mistakes. While beginning right after the last film which ended in sunshine and daylight this film picks up at night in the rain. The geography of New York is laughable with characters moving impossibly through the city in ways anyone with a passing knowledge of the city will recognize (on foot in the north end of the Times Square Wick hops a cab  to suddenly be several blocks south and west of where he was- at a time his destination, NYPL, was closer before he got into the cab. He then end up in Chinatown in minutes when it would take him 30 minutes to get where he wanted to go.) And I won't get into the missing finger that is still in some shots.

Of course you won't care because the action just keeps going.

I really like the film a great deal. I love that the Wick saga is actually expanding. Of course none of it is realistic but hey, its a great deal of fun.

Highly recommended for action fans
Posted by Steve Kopian at May 29, 2019