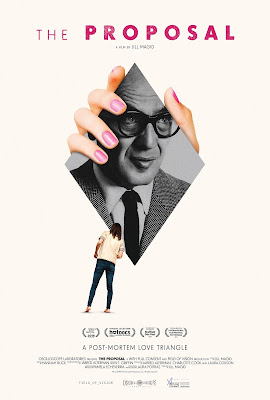 THE PROPOSAL played the Tribeca Film Festival  last year where it turned out to be one of the best films of the fest. With the film opening Friday here is the review I filed when it played last year.

Director Jill Magid was working on a project involving the work of Luis Barragán Mexico's most celebrated architect. When she asked to see his professional archive, which was purchased by a Swiss company she was told she could not. She soon discovered that the owners of the archive don't let anyone see it and are ruthless in controlling the intellectual properties connected with it. In an effort to secure access Magid went down a long road which ended up with a proposal to have the archive returned to Mexico.

Hidden gem of Tribeca doesn't go where or how anyone expects. You may have read about the case in the papers but I had no clue and thus was completely enraptured by the tale and where it goes. If you don't know I'm not telling. This was the first film of the day and it haunted me during the rest of my time at Tribeca. What a weird little tale.

While I wish we got to know why Barragan matters, the story that has enfolded around him makes this film one you really should see.
Posted by Steve Kopian at May 20, 2019