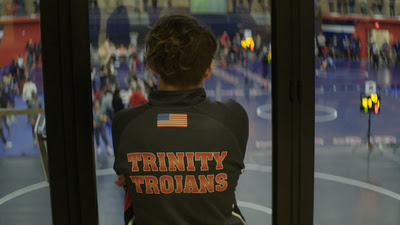 A look at how various communities handle the trans athletes in high school sports. In Texas Mack Beggs, a trans man is forced to wrestle in the women's division with the result he is pretty much beatable. In New Hampshire the fact Sarah,a trans woman, is limited where she can compete turns her into a force for social justice and changing laws,. While in Connecticut Andraya, a trans woman, runs on the  women's track team causing an outcry about an unfair advantage.

Smartly looking at the questions and problems from all angles CHANGING THE GAME is a largely fair and balanced look trans athletes today. While the film could possibly be faulted for not giving more time to those against the trans athletes, it's understandable since pretty much everything we hear from the naysayers is vitriolic and nonconstructive. On the other hand director Michael Barnett is smart enough to make some effort to address their points so while we may not get the naysayer words we are shown what they are arguing, and then refute it.

I really like this film a great deal. It is a smart and moving film that beautifully illustrates the complexities attached to trans athletes.

Recommended
Posted by Steve Kopian at May 05, 2019