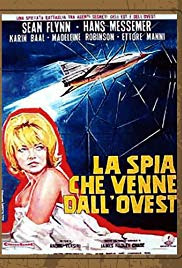 Sean Flynn, son of Errol, stars in a surprisingly good thriller set in the legendary city. Flynn is approached by the wife of a friend of deceased father and asked to try and find her missing husband. Told he is a traitor and whatever happened to him was his own doing, Flynn heads off to follow leads in Venice. Once there he finds his life in danger as he realizes there is more than meets the eye to the story.

If you can get past the fact that we never really know why Flynn ends up tasked with finding the missing husband by someone he really doesn’t know, this is a nifty thriller. Playing reasonably realistic it’s vastly different from how Hollywood would handle the story today- where we’d have explosions, chases and illogical action sequences, but here we have leg work and chance and suspense and action and violence of the sort we might actually see. This is more something one of us might fall into.

I really liked this film a great deal. To be certain it isn't perfect, but it is damn engaging- you genuinely want to know what is going on and why. I started the film when I wasn't feeling good, fell asleep on it, then immediately restarted it from the beginning when I got up simply because I liked what I had seen.

An absolute small gem of a film recommended for anyone who likes thrillers and Eurothrillers in particular.
Posted by Steve Kopian at May 17, 2019