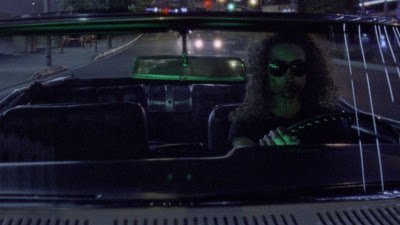 This is a repost of a review that ran during Tribeca

A painter of some note has stalled on her commissions and has them pulled from her. As the landlord comes calling she retreats into a series of drug fueled parties. After one wild outing she finds herself craving blood.

Alternately brilliant and annoying BLISS is a film that confounded me. While possessing some wonderfully off-kilter and disturbing moments and a great central killer performance by Dora Madison the film would seem to be poised to be a horror classic. However the shrill soundtrack, annoying characters and a sense we've been here before prevents the film from truly flying. Yes the carnage, when it comes is well handled but it takes a while before it comes and we are left to cope with some annoying hipster characters we really don't like doing things we don't care about.

If that sounds like I don't know what I feel about the film you would be right, I don't. The film is really too all over the spectrum to really get a handle on.