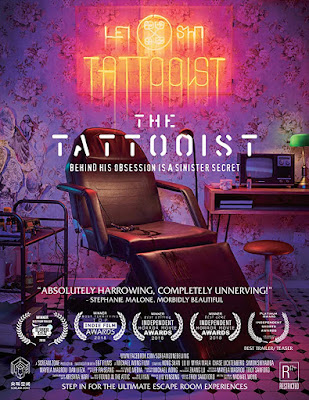 Director Michael Wong has done a terrible thing He has made a wonderful micro-short that kicks serious ass and is impossible to review. Its such a problem to write about that it has taken me four months to figure out how to write the film up. I mean I could have written a single line and been done with it, however that isn’t fair. More importantly I could explain how the 90 second film showcases just how good Mr Wong is.

The plot, or as much as I can tell say, has a tattoo artist tattooing the back of a beautiful girl and thinking about things. Other than that I can’t say more because, well that would give everything away.

The Tattooist is a neon drenched rapid fire film that feels like the trailer for a much longer film, except that it says and does everything that a feature would do in two minutes. It is a film that left me staring at the screen the first time I saw it in disbelief. Did I see what I thought I saw? I mean the rapid fire images were like watching a stunning ballet that ends with a poke in the eye. I had to watch the film again…

If this isn’t a calling card for a big Hollywood feature film I don’t know what is. As I said back when I reviewed Mr Wong’s THE STORY OF 90 COINS he is a great director, and this film proves it. His marriage of sound and image is beyond masterful.

What makes Wong’s work so important, and what tripped me up in writing the film, is that what Wong does with sound and image isn’t just pretty pictures. He is working them for maximum effect for the story he is telling. Because the film is so short I can’t tell you how each image builds on the next so that we are pulled in and dragged down a run down corridor before we are slapped across the face. Earlier versions of this review went into detail explaining what he was doing, but I couldn’t post those reviews because it would take away from your reaction when you saw the film. I wanted you to have the same reaction that I did when I saw it the first time all those months ago and again when I saw the film to write this piece. If I talked about what happened then you wouldn’t be slammed into silence at realizing what you just saw as the end credits came up. I can only imagine how this played at a festival where the film just comes up out of nowhere, grabbing an unsuspecting room of people by the throat before dropping them off in some dark place before they realized it.

Make no mistake The Tattooist is a great film. I’m not just saying that, I mean it. I am so serious about how this 90 second film is one of the great films of 2019 that I took four months to write about it.

Yea, The Tattooist is a great film and Michael Wong is a great director. Now someone, anyone let him do what he just did for two minutes for a film that’s a two hours.
Posted by Steve Kopian at July 11, 2019