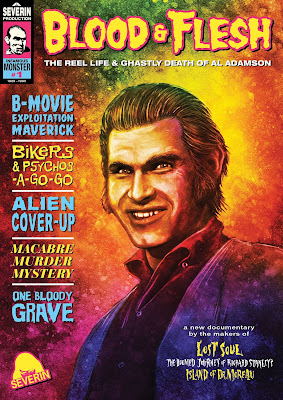 A look at  the life and death of filmmmaker Al Adamson  is  a loving portrait of the man who gave use films like SATAN'S SADISTS, BLOOD OF GHASTLY HORROR and BRAIN OF BLOOD. All his films were made fast and cheap and almost all of them turned a profit, even if the crews didn't always get paid.

Good but nothing special documentary is for most of its run time your typical bio with the friends of the filmmaker talk being interviewed now while old interviews with Adamson are inter-cut with clips of his films. We've been here before but as a primer for the works of the schlock king its can't be beat. If you don't know Adamson or his work this is a perfect place to start before tracking down his films, most of which can be had either streaming or on the bargain DVD market.

The film turns into a kind of cable documentary in the final twenty or twenty five minutes as we watch as Adamson becomes interested in UFOs, has some strange experiences and is murdered by a handyman working in his house. While this is the way Adamson's life went, the turns seem out of left field and in a weird way completely out of place with the first hour plus. I think part of the problem is that until a certain point we don't really get a sense of Adamson's personal life. Yes we do see some of the women he was involved with but there was no sense of his life outside film so the change of focus seems weird. Additionally events play out rather fast and are less detailed than the talk of his work so it all seems rushed.

Quibbles aside I really do like the film a great deal. It gave me better insight into the man and his work. I have a new found respect for some of the films that I didn't have before. If you've never seen an Adamson film or if you are well acquainted with them the film is a must see since it will fill in your knowledge of an influential filmmaker. (though I don't think you'll be as in awe of him as Quentin Tarantino)
Posted by Steve Kopian at July 17, 2019