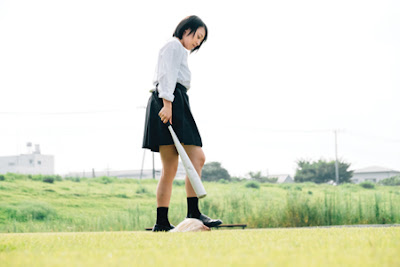 Not that Cocoa—a high schooler trapped in a nowhere town with a widowed gambling addict father and moocher older brother—ever goes that far in her own videos: she restricts herself to flattening old cans, bottles, and plastic toys while dressed in her schoolgirl uniform. Sometimes she might get a little crazier and smush a raw sausage or a birthday cake between her naked toes. But the furthest she’s ever gone was a video where she snuck into her school after-hours and massaged a bunch of balloons with her toes until they popped. If she’s bothered by the thought of perverts getting off on her work, she doesn’t show it. With two deadbeat leeches at home to support, she needs the money. Besides, she reasons, it’s not like she’s getting naked or having sex. But such nuance will ultimately prove irrelevant in Matsugami’s quietly powerful tale of economic desperation, familial strife, and societal ostracism. Cocoa’s dull life is rocked when she’s told by a school advisor that her grades are good enough to get her into a national university where the tuition will be a mere ¥3 million (about $27,600). Realizing this might be her ticket out of her humdrum life, she scrambles to collect as much money as possible. After discovering her father gambled away the ¥1 million her mother saved for her college, she doubles down on her crushing videos to raise the funds needed for entrance fees.

Matsugami is very careful not to condemn or judge Cocoa’s decisions, presenting her as the victim of economic injustice and familial neglect. However, Matsugami overplays himself in the last act by introducing a head-scratching yakuza subplot which sees Cocoa confront a group of murderous gangsters at a junkyard with a pickaxe. Despite making sense in context, this artificial raising of stakes keeps the film from reaching greater heights as an incisive, sympathetic work of humanism.

Demolition Girls will also be screening July 29th as part of Fantasia Fest in Montreal
Posted by Steve Kopian at July 20, 2019