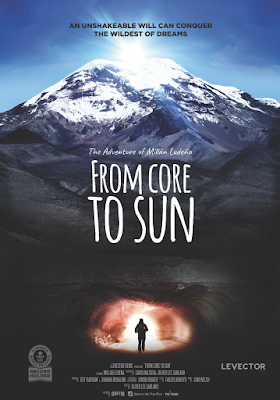 Portrait of Millan Ludeña who decided to runa marathon- half at the place closest to the center of the earth, in this case Mponeng Mine in South Africa, and the other half at Mt. Chimborazo in Ecuador. Which because of the weird shape of the earth is actually the closest place on earth to the sun. The plan is to do the runs within 65 hours ending on top of the mountain at sunrise.

Good portrait of a weird challenge that Ludeña sets himself. To be honest I still don’t full grasp the reason why, but then again with many similar physical challenges I just go with it. Its just something that someone wants to do.

While we have been here before on some level, the film is typical sports tale, the film is of interest in that the film shows wha it took for ---to put the feat together. We not only see him train but also other aspects of putting something like this together. As a result Core to Sun becomes something other than the typical athlete meets a challenge.

While I sort of backed my way into covering the film, I popped it on to fill an empty slot, I ended up having a good time watching it. While I really wish it hadn’t been a little too feel good, the triumphant music can be a bit much, the story it tells compels.

Currently out on VOD Core To Sun is worth a look