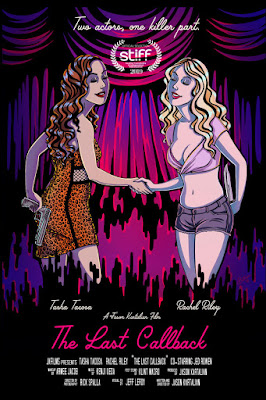 Someone please give Jason Kartalian the money to do a feature comedy. I say this partly because I want to see what he does with a comedic feature, and partly because I am tired of laughing so hard at his shorts that I almost choke to death from having the popcorn go down the wrong pipe.  If he’s going to kill me he should just do it all at once instead of by small, very, very funny degrees.

Jason’s latest attempt at homicide comes in the form of his short THE LAST CALLBACK. The film is the final auditions of two actresses for the role of a crack addicted serial killer prostitute and what follows.

A stunning comedic tour de force for Tasha Tacosa and Rachel Riley, who were the titled giant women in Jason’s documentary and glorious love letter to filmmaking GIANT WOMEN, MICROBUDGET, this film just lets the women go crazy and show what they can do. Watching them go from a straight on reading of the proposed role into what they think the directors want, on to the mania of ripping their competition is a joy. More importantly the shifting nature of their performances reveals them to be so much better than the role they are being offered. I completely understand why Jason would want to make a film with the pair at the center, because they are really funny and work incredibly well together. (Jason, please a buddy film for them)

What delights me about Jason’s short comedies is that he understands how to pace a film. When you see any of his comedy shorts, such as SUBCULTURE or this watch how he builds the comedy. Starting with a premise, say dueling auditions, he builds and inflates the situation, (the women become more and more over the top). He raises the stakes further with a twist, and then twists it again…. And by the end we’re doubled over with laughter, tears streaming down our face.

So few people do that anymore. Most people think a funny line or a non sequitur is the way to go, but Jason understands that building a situation creates greater laugh. It is the way comediennes like Keeton, Chaplin, or Jacques Tati built their comedy.

Jason Kartalian is a genius. He is one of my favorite filmmakers and his film THE LAST CALLBACK is a masterpiece. 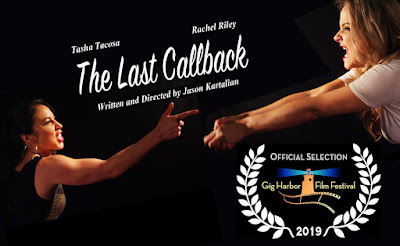 See THE LAST CALLBACK at The Seattle Stiff Festival on Sunday July 28, 12noon at the Factory Luxe and at The Gig Harbor Fest in September
Posted by Steve Kopian at July 18, 2019