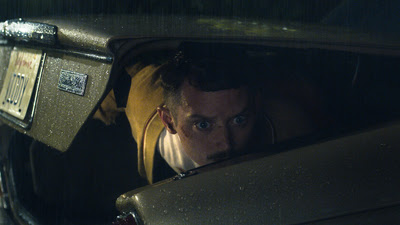 I can only talk about the set up for COME TO DADDY which is good and bad. It’s good because I won’t give anything away. It’s bad because there volumes to say about the film and I don’t discuss it lest I ruin it for those who haven’t seen it.

The plot of the film has Elijah Wood going to see his long lost dad on the coast of California. Wood hasn’t seen his dad in decades and he has been summoned by his dad in an effort to build bridges. Or so he thinks, because once he gets there dad (Stephen McHattie) isn’t what he remembers and is acting very oddly.

And I’m leaving it there because what happens is the movie. It’s also a not what I expected.

Part comedy of discomfort, part thriller, part horror film and part “WTF were they thinking” COME TO DADDY surprises you every five or ten minutes with turns and shadings that are completely unexpected. It’s a film where you think you know what’s going on until you don’t. This is a film that is very much taking place in the moment. We are not given any sort of clues as to anything beyond what we are seeing until something happens or is said in the normal conversation; and that flips everything that has gone before without mess plot twists. It is a ploy that most film directors don’t use, they want to tell you way too much, but Ant Timpson brilliantly doesn’t do that and instead uses the way life really works against the audience. The turns are such that you’ll want to see the film again just to see how it all plays out now that you know what is going on.

I really like COME TO DADDY. While not perfect, there are a couple of bumps along the way, I love that it’s a funny film that forces the audience to stay on their toes and talk at the screen as things shift and change with a mere line.

A wickedly poisoned delight you'll want to see more than once..