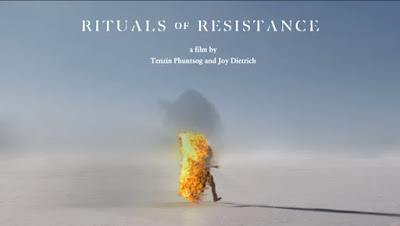 RITUALS OF RESISTANCE is a look at resistance to the Chinese occupation of Tibet from the stand point of former monk tuned resistance fighter, a woman who was raised out side of Tibet but whose siblings still live there and a young man who feels stateless and turns to suicide as a form of protest. It is tied together by the ponderings of the director.

Meditative film about a lost home is by turns fascinating, kind of dull and rather thoughtful. Covering a wide variety of positions it makes us think about the notion of  a place that is supposed to be home when in one case we haven't been there in decades and in another not really at all. It is a film that makes clear the enormity of the task of protesting a huge injustice which is not really being paid attention to since the protests are barely noticed by the Chinese government.

I love that the film tells the story of the variety of the protests that have been taking place over the last almost 70 years. Lobsing Tendar's tale of a monk becoming a warrior shines light on those who chose to fight. It is a tale most people don't know but should. I love how the the film makes real this longing for a place that very few refugees really know as an actual place. Tsekyi Dolma had been there in decades when she went back and snuck into the country to see her family, while Lhakpa Tsering only knows of it from his home in India and yet they both long to return. There is a physicality to their longing that is heartbreaking.

At the same time the films structure can be a little too meditative. The mix of sound and image, of rolling country sides had me drifting off.  While I understand the film is a kind of prayer it is a little too reflective. Its not fatal but it kept me from fully remaining engaged. I mention this more as a warning then as a flaw.

My only real complaint about the film is its final image of the director running through the desert on fire. While the image is a correct one to end on, the handling of the digital effects is jarring and I found myself breaking with the film as if awoken from a dream. it broke the spell the film had crafted in the previous hour.

Regardless if you want to know about the state of Tibetan protests of China this film is a must.

RITUALS OF RESISTANCE plays July 28th 209 at the Asia Society. For tickets go here
Posted by Steve Kopian at July 27, 2019