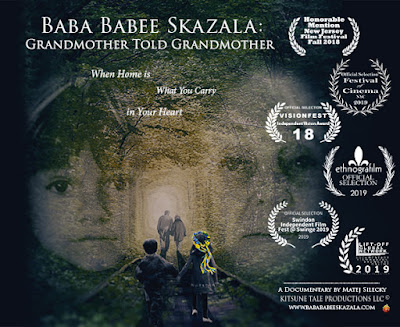 BABA BABEE SKAZALA: GRANDMOTHER TOLD GRANDMOTHER is an enlightening hour long documentary about the plight of the children from Ukraine who ended up trapped between the soviet and nazi armies during the second world war. The film charts their struggles for survival and in many cases their flight to the West where they established still thriving Ukrainian communities.

You will forgive me if I don’t have a great deal to say. This excellent little film expertly tells a story that I’ve not really heard before, and that is the tale of an ethnic population trapped between two super powers who wanted to make their land theirs. While there is no doubt the Soviets were fighting on the Allies side in the Second World War they were also working on land grabs of their own. This film reminds us that despite Stalin being friendly to those keeping his butt safe he was still up to no good.

An solid film, recommended to anyone who wants to deep dive in a part of history they probably are not familiar with.