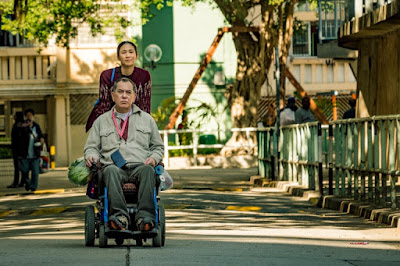 Anthony Wong once again proves how good an actor he is in Still Human, the story of paralyzed man who takes on a new caregiver who doesn’t speak Chinese. At first butting heads, Wong, and an equally good Crisel Consunji as a Filipino nurse eventually find a common ground.

While not hitting any new ground, the film is in similar territory as INTOUCHABLES and the recent remake THE UPSIDE except in a low income setting, the film shines because the actors create characters we really care about. These are real people up there on the big screen and we are moved. Frankly I completely understand why the film has won numerous awards.

As much as I like the film I am in awe of Wong’s performance. Watching his body language in the wheelchair it would seem as though he has been in the chair his whole life. It goes beyond the way he sits to the way he moves his arms and hands and reacts to the people around him. It is a total body performance and it is stunning. It is one of the greatest performances I’ve ever seen.

Even allowing that there have been a couple of similar stories told recently, Still Human is a must see when it plays at NYAFF this Sunday.

For tickets and more information go here.
Posted by Steve Kopian at July 10, 2019