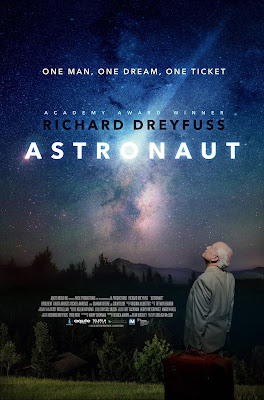 Richard Dreyfuss plays  Angus a 75 year old widower who being shuttled off to an old age home. Always wanting to go to space he signs up for a contest to get a seat on the first commercial space flight. However things don't go as he plans as his health and the discovery of a possible problem with the flight complicate things.

Certain to be in the running for various awards Richard Dreyfuss is the reason to see this film. While most certainly a good film, it is Dreyfuss's emotionally charged performance that drives the film. Not only do we feel all his aches and pains but we see deeply into his heart and come to understand the man. Dreyfuss makes us one with Angus, with the result that every emotion we feel, tear we cry and laugh we make is honest and genuine.

I am deliberately not discussing what happens since the film has a great deal going on and if I say the wrong thing it will make it sound like it is something it is not. I say this because much of the film is focused on what happens when we and our parents grow older. What exactly happens to ourselves, our dignity and most importantly our dreams. If I discuss the growing old crap (which is right on and perfect) you will lose sight of the fact that this is really a film about following your dreams where ever they lead you-for however long it takes to achieve them.

I should probably warn you that this is a drama first and not a science fiction film. It is not about the space flight but about getting there. Saying that a space flight happens is not giving anything away because of what is in the photos, trailers and the very title gives it away.

THE ASTRONAUT played Fantasia earlier this evening. It will open in theaters at the end of July.
Posted by Steve Kopian at July 15, 2019