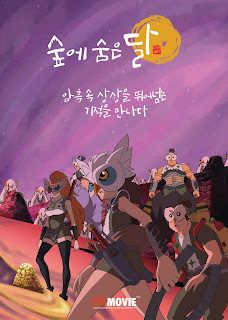 In a world where the moon has gone missing a princess who is the heir to a great power flees the castle into the city where she meets a young musician who rescues her from her pursuers and takes her back to his village. Pursued by the creepy older guy who wants to marry her so an evil force can take over the world conflict soon occurs.

Visually impressive but narratively  unremarkable (hence the bland telling) MOON IN THE HIDDEN WOODS will delight you with all the cool visuals and small details, while making you wish the filmmakers had been as creative with their story as the visuals.

I loved att the strange creatures that wander through the film. I also really loved the sense of place the world creates. All of the differing locations feel well thought out. Everything integrates and makes sense both together and separately. That may not sound like much but most films have cool things that make no sense when put together.

The Korean folktale vibe is also really well done. While I suspect it could be argued that the folktale basis of things is the reason for the story's twists and turns, I don't think the slow middle section is the fault of basing the film on the structure. Indeed the fact the film begins and ends like gangbusters gives and indication of what the film could have been had it not wanted to stall and show so much of village life. Because the film slows down we can use the folktale plotting to work out how this is going to go and it takes an edge off the excitement.

Regardless the film looks great and when the film is firing on all cylinders it can't be beat. Recommended for those who love cool animated worlds.
Posted by Steve Kopian at July 29, 2019