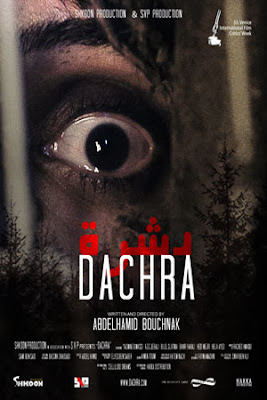 Trio of journalism students make their assignment to produce a piece of reporting that is unique by investigating the story of a supposed witch found wandering the road with her throat slit 25 years before. This leads them first to an asylum and later to hidden village where the people have weird habits. Of course it all goes horribly wrong for everyone concerned.

By the time I saw DACHRA I had been chasing after it for several months. I had run across it at a couple of film festivals but never managed to see it, with scheduling and ticket availability working against me. Finally after a couple of well-timed emails I managed to see the film I at the Fantasia Film Festival and I am both thrilled and slightly disappointed.

Either the first or one of the first horror films to be produced by the Tusnisian film industry DACHRA has a look and feel all its own. We are not in Kansas or anywhere really familiar any longer and we are better for it. Nothing seems normal or as expected. This is not a horror film world we are used o seeing on the big screen and as a result we are on edge. Yes it looks like something we might see say in Eastern Europe but there is a decidedly different flavor to it.

The cast is first rate. They sell the fear and confusion putting us deeply on edge.

Also putting us on edge are a series of sequences that draw out the raw horror and nightmare quality of what we are seeing on screen. From the opening murder of a little boy, to the mad eyes of a little girl eating a crow to clothes line full of entrails to the chilling conclusion we are kept off balance. Director Abdelhamid Bouchnak has a keen sense of how to instill terror with a mix of sound and image. The images and sequences that he has put together and make up Dachra are among the best in any horror films of recent vintage. They are so good that left to their own devices they chill the blood. The image of the little girl below for example unnerves me to such a degree that I had to see the complete film.

Unfortunately it’s the complete film where the film kind of stumbles.

Say what you will, the plot of interlopes coming upon a hidden village with bad results is one that horror film lovers have seen many times before. Most directors try and cover over the sameness with some sort of twist in the proceedings, unfortunately Bouchnak doesn’t do that and as a result the film as a whole clunks in and out of cliche, even though the pieces are sterling. While well told, the lack of any sort of twist or road block drains the excitement out of the proceedings because we’ve already worked out how it is going to go. While the clichés don’t kill the film entirely, they simply make what could have and should have been an all-time classic just a good little horror film. (It also allows us time to ponder a couple of narrative WTF moments we shouldn’t notice) 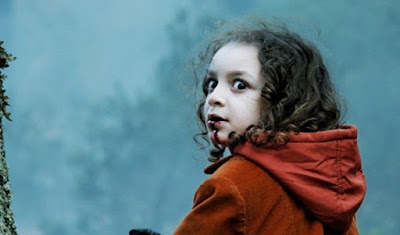