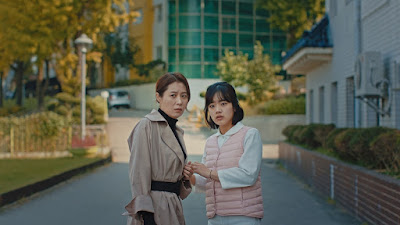 Sweet small scale film begins with an X-ray being found of a romantic twist in the X- ray room, which leads to speculation as to who it was. Nurse Yoon-young thinks it was her and goes into resign only to find she and one doctor are the only ones who haven't called in sick...

...spinning out in unexpected directions from there so as to include all sorts of seeming digressions from sink holes to cat fish, MAGGIE charms at almost every turn. Working entirely because we like the people in the film MAGGIE simply is good times with good people. To be certain things go oddly at times but we always accept it. What ever happens we simply accept it.

I was delighted and I suspect you will be too.

MAGGIE plays Saturday at the New York Asian FIlm Festival and next week at Fantasia in Montreal
Posted by Steve Kopian at July 11, 2019