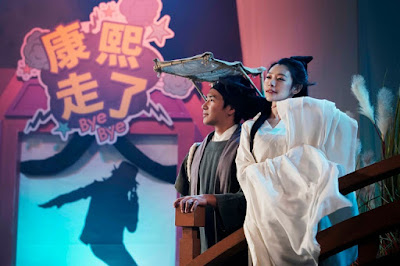 The owner of a TV station trying to kill ratings puts the least competent person imaginable in charge of programming. To assure he can’t make it work he is given limitations as to what he can do, yet somehow ratings going up, ruining the bosses plan to sell off the station to some bad guys.

I can’t review this film objectively. This is a film that is not for all audiences. Full of the sort of the over the top crazy humor that lies somewhere beyond low brow, stupid and off kilter Mad Mad… is going to delight those who love the truly crazy Chinese comedies that occasionally escape to American shores. For those who haven’t seen the sort of madness that sometimes invades cinemas this is going to be a tough slog. While a great deal of it is very funny, often in a standalone manner, a great deal of it doesn’t hang together. The film seems forever reaching for the next joke, much like some old school British music hall comediennes used to. You either accept the madness and go with it you don’t. I was fine for a while until I just got tired and gave up.

Since sense of humor vary, I’m going to say you’re on your own with this one.
Posted by Steve Kopian at July 04, 2019