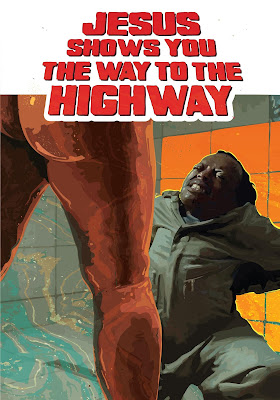 Miguel Llansó the mad genius who made CRUMBS, a post-apocalyptic film that haunts me still, is at it again with JESUS SHOWS YOU THE WAY TO THE HIGHWAY, a one of a kind masterpiece that only he could have made.

In 2034 Soviet era computer virus with the titled name and controlled by cyber being Joseph Stalin is attempting to take over the world. Two CIA agents have to deep dive into the cyber world in order to stop him.

Wild and crazy and a one of a kind sense of reality JESUS… is a trip. Riffing on other films and refashioning pop culture to its own ends (in the cyber world people’s avatars are famous people, and some characters run about in 1966 Batman and Robin costumes) this film puts us in a headspace that both familiar and totally alien. Like in life everything is not one unique thing but smashed together. What makes this work is that Llanso creates worlds that are truly real. He takes our world and figures out what will be around in however many years. More importantly Llanso never forgets that people are people. There are small details that may or mean nothing, making pizza as a hobby for example, but they give us a hook and a sense that there is more to the characters beyond what they need do in the film.

This film is a masterpiece and Miguel Llansó is a genius. In a world where everyone is making and remaking films that are a dime a dozen Llanso is making things that are unlike anything out there even if they borrow from everywhere….

…and on that note if there is one filmmaker that Llanso is like it would be Quentin Tarantino who shares his love of cultural riffs. However unlike Tarantino Llanso uses the riffs to tell a greater truth. They are not what his film is about, instead they are window dressing and touchstones that are layered into the fabric of his films so that we can better fall under his spell. Because the references and riffs are friendly we are more open to what he wants to tell us. Also because of how they are used they trick us into believing that the world is real because it is like our own.

Make no mistake about it Miguel Llansó is truly one of the greatest filmmakers working anywhere in the world.

JESUS SHOWS THE WAY TO THE HIGHWAY is a must at Fantasia or where ever it plays. Even if you don’t like it you need to see it in order to know the work of a director who is doing something amazing.
Posted by Steve Kopian at July 18, 2019