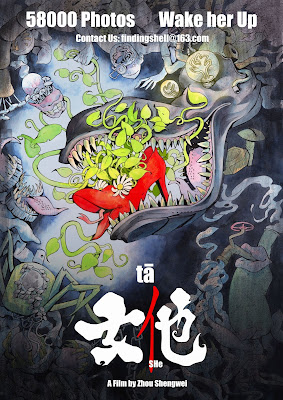 SHe (yes the two capital letters and the single lower case letter is correct) concerns a female shoe creature who escapes from the pens where women are kept and masquerades as a man hoping to find some sort of freedom and instead finding things are not as expected.

Wordless and strange beyond words She is a one of a kind film. It is a film that is going to delight many and drive many more to the exits. I don’t mean that as a knock, rather this is just a film that is going to either delight you or be revealed as too weird. I mean this is a film about sentient shoes, ones that create socks and drink stockings.

A masterfully animated film that should be seen just for the technical achievement, the stop motion is so perfect that there is almost no sense of the animator. The animation is so smooth that the creations on screen truly seem to transcend their inanimate existence and take on a nightmarish life.

I personally adore the images and the strangeness. This is a singular work of a unique visionary. At the same time I am fully aware that this is not going to sit well with many people- especially at feature length.

For those looking for the weird, the wonderful and the strange this film is a must. For anyone looking for a vanilla film look elsewhere.

God bless Fantasia for bringing us this masterpiece.

SHe replays July. For more information or tickets go here.
Posted by Steve Kopian at July 16, 2019