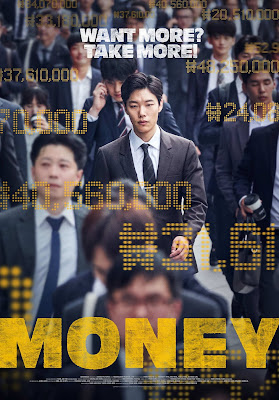 Super little thriller played around the US earlier this year and now is playing at Fantasia concerns a young stockbroker who make a deal with a shadowy source called The Ticket for tips. When the regulators come calling The Ticket decides to close up shop and take care of loose ends.

Beautifully acted by some of the best actors in Korea MONEY is a smart little film that grabs you and drags you along. The cast works perfectly with the script so that the technical talk never over whelms the drama. We are invested in what is happening.

How good is MONEY? The fact that the film is being picked up by festivals like Fantasia and NYAFF even after it's run earlier this year is a good indication of a fan base that wants to have this film get the recognition it deserves. I couldn't agree more.