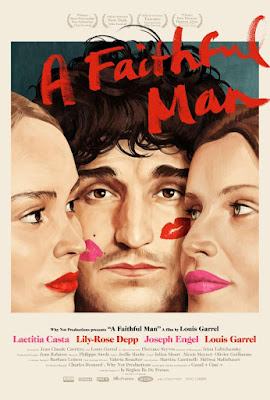 Louis Garrel's A FAITHFUL MAN maybe the lightest film I've seen so far at the New York FIlm Festival. There is nothing wrong with that, but I only mention it because so many New York Film Festival films the last few years are very heavy so that its inclusion in the main slate seems like a mistake.

Abel is romantically involved with Marianne. When she become pregnant she marries Paul and Abel walks away from her life. Years later when Paul dies Abel goes to the funeral and he and Marianne begin again. The trouble is her son seems to think his mom killed his dad. Also in the mix is Paul younger sister who has eyes for Abel and wants to make a move to get him.

Wonderfully off kilter romance surprises at every turn. While we can be pretty sure how it will go the film doesn't get there on an easy road- which results in frequent laughs and knowing nods. While far from perfect, the film is only a breezy 75 minutes and could use some fleshing out, it is as entertaining as they come and the audience of critics I saw this with laughed in all the right spots all the way through.

High art? No, but quite possibly the most entertaining film at this years New York Film Festival.

A FAITHFUL MAN opens in theaters Friday
Posted by Steve Kopian at July 16, 2019