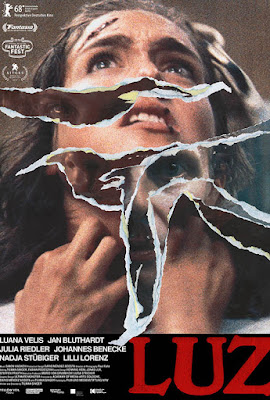 This is the review I originally posted in October when LUZ was making the festival circuit. I was asked to take it down until the theatrical release and with that happening Friday I am reposting it.

I am delighted that LUZ is playing so many major genre festivals (Fantasia, Fantastic Fest, Brooklyn Horror) and getting solid critical world of mouth. However at the same time I am very curious what most horror fans are thinking because ultimately the film is not really a horror film, it’s something else entirely. While there are chills, there are no jump scares. While there is some violence it’s not what you think.

The film is about a young woman named Luz. She is a cab driver who as the film begins has walked into a police station. From there it becomes essentially two monologs/stories as a woman at a bar tells a doctor about her friend and then the story that is revealed as Luz is hypnotized and relives the earlier part of the evening. Its low tech and chilling.

And while it does involve a demon it really isn’t a horror film. I can’t tell you why because…well… that would be telling. Yes it has some of the tropes of the horror genre but when you get to the end you’ll realize that the film was going somewhere else.

Its brilliant and probably one of the best films of the year. I say that because over 24 hours after I saw I can’t stop thinking about it. I can’t move on. The construction of the film is so damn perfect I kind of wonder why it hadn’t been tried before.

Actually the reason the film works is because of the cast Luana Velis as Luz, Jan Bluthardt as the doctor and Julia Riedler as the girl in the bar are Oscar worthy. They may very well be the best ensemble of the year. They get it right. All of them are as good as you can get. Bluthardt is particularly stunning because he simply has to turn on dime repeatedly. I am in awe. It is a performance that should be studied.

While most definitely a genre story selling it as a horror film is selling it short. There is way more going on here and we are better for it.

I am going to guess that the gorehounds and those expecting a typical horror film are going to be initially disappointed but I am guessing that down the road, when they revisit the film they will see it to be the masterpiece that it is.