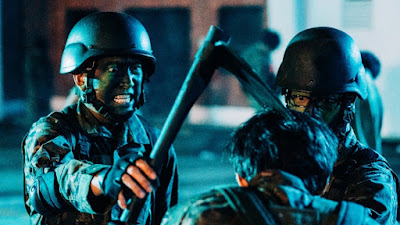 And incredibly, it isn’t half-bad. That might sound unfairly glib, but anyone who works the festival or VOD circuit long enough usually develops an innate suspicion of any international horror movie that touts itself as the first of anything. Usually it’s just a cheap marketing gimmick meant to suck in horror completionists or the merely curious—rarely are they actually competent films in their own right. But Jacen Tan’s Zombiepura has some putrid meat hanging from its decrepit bones.

Utilizing the tried and true formula for zombie movies seeking crossover appeal, it bounces from genre to genre getting progressively darker and more serious as it continues. The first third plays as a slacker comedy as Kayu (Alaric), the laziest soldier in Singapore’s army reserves, runs afoul of his commanders and the military bureaucracy as he tries to get off guard duty by claiming to be sick. Of course, when he finally arrives at the doctor’s office he discovers that it’s already inundated with soldiers with a strange cough. It’s in this extended introduction that we’re introduced to a large, diverse cast of characters inevitably doomed to become zombie chow, such as Kayu’s best friend, the equally cowardly Jeya (Haresh Tilani). But we also meet a handful of characters who’ll obviously survive until at the least the incredibly dark—figuratively and literally—last act, as they’re either foils for his own personal growth or potential love interests, specifically the appropriately named “Beauty” (Joey Pink Lai), the daughter of one of the army camp’s employees who happened to be at the wrong place at the wrong time.

While the third act descends into predictable genre hysterics, it’s the second act that packs the most punch as it follows its band of misfits as they navigate the overrun camp. Tan gets a lot of comedic mileage over his zombies retaining “muscle memory” of their past lives—whenever the Singaporean anthem is played they snap to attention and when they’re confronted with an obstacle course they instinctively run it even while pursuing prey. But unlike the films of George A. Romero, there’s no satirical bite here—Tan isn’t making a statement about militarism or the depersonalization endemic to restrictive states like Singapore, they’re just gags. That might not be enough for some people, but for casual genre fair, it’s decent enough.