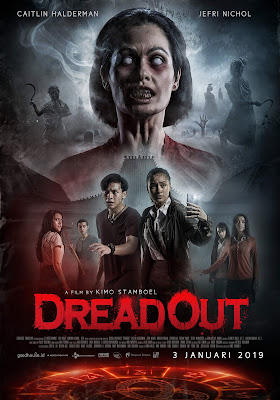 Based on a popular Indonesian video game DREADOUT has a group of teens going to an abandoned block of apartments where a cult once tried to raise the dead. The idea is to raise their social media status by steaming their adventures. Of course things go horribly wrong and a portal to the next life opens up releasing demons and the evil girl in red.

Beginning with a gangbusters opening where a rite goes leaves a room of carnage and then speeding along at a breakneck pace DREADOUT is a film that just grabs you and drags you along never giving you any time to breath. I would be lying to say that we haven't been here before, but at the same time director Kimo Stamboel fills the film with sights and sounds that are guaranteed to put chills into you. Worse he is well aware that we've seen similar films and in a couple of places he uses that information against us.

Normally I would groan at a film such as this which on the face of it seems to be nothing special  however when the film turns out as well made and fun as this I really don't care. Give me black blood and needle teeth and I'm a happy man.

One of the great finds at Fantasia DREADOUT is highly recommended.
Posted by Steve Kopian at July 18, 2019