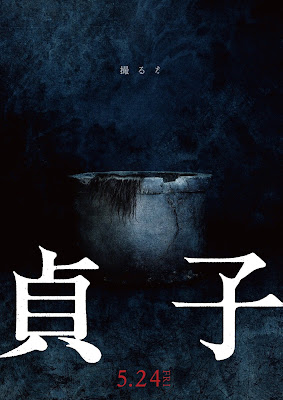 Hideo Nakata returns to the film franchise he started with Ringu in 1998 for rough;y the 12th feature film in the sequence that has included films from Japan, Korea and the US.  I wish I could report that the return brought great things but the fact is the series has long ago run out of steam and the effort to give it new blood is wildly uneven.

After a mother tries to set her daughter on fire because she believes her to be the reincarnation of the evil Sadako, the girl at the center of the Ring curse, the young girl is brought to a mental hospital with amnesia. Put in the care of a young doctor who genuinely cares for the her girl begins to come around despite weird things happening around her. At the same time the doctor's brother visits the apartment where the fire happened and several people died. This unleashes Sadako once more on the world.

The opening sequence to SADAKO is full of creepy dread. Watching the mother prepare to burn the daughter she locked up is truly troubling. What makes it worse is we know that Sadako is locked in a cave by the sea and is nowhere near the apartment that is soon to become an inferno. Watching it I had high hopes for the series that had pretty much run its course several films back.

Unfortunately the film soon stumbles once we are introduced to the doctor and her goofy brother. While they would be fine in almost any other film, here the goofiness and the forced sense of foreboding fail to generate any scares. Any tension created by the opening sequence is instantly lost in the corridors of the brightly lit hospital.

The only real tension or frisson in the whole film comes from the weird moments where the young girl sees dead people. The first such person had me talking to the screen. After that the only times I perked up was during some of the supernatural bits.

Sadly despite the best intentions of restarting the series the film falls into the same patterns of the last couple of movies where a couple of really cool moments are lost in the connecting material; which only exists to give the scary bits a reason to exist. In all honesty I really hope this is the end of the road for the series for a very long time because at this point the cash cow is long  dead and been replaced by a cheap pleather imitation.