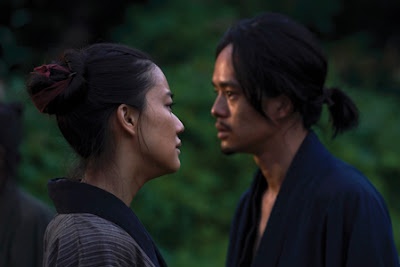 Viewers familiar with Shinya Tsukamoto only for his earlier work in transgressive art-house horror and ultra-stylized, hyper-violent social dramas might find his latest film Killing quite the oddity. For one, it’s a chanbara film set in the late Meiji era, a setting Tsukamoto has only utilized once before in his 1999 film Gemini. Secondly, there’s precious little of the frantic pacing and ultra-kinetic editing that made his work so distinctive—there are even moments in this film that could be accurately described as staid and meditative. But the film is no less a product of his fevered mind than his breakout cult hit Tetsuo: The Iron Man (1989) or his nihilistic manifesto of masculine self-destruction Bullet Ballet (1998).

As with many of his other films, Killing sees a young man whose life is radically disturbed and redefined by a sudden exposure to violence. In this case, the young man is Mokunoshin Tsuzuki, a young ronin lodging with a village of rice farmers. When he’s not helping with the harvest, he’s practicing his swordsmanship with Ichisuke, a young farmer who dreams of transcending his class and becoming a proper samurai like Mokunoshin. However, their peaceful lives are shattered when an older traveling samurai named Jirozaemon Sawamura—played by Tsukamoto himself—comes to recruit the two into his group of fighters sworn to protect the shogun. When a nearby group of thugs roughs up Ichisuke, Jirozaemon takes it as a personal affront to one of his soldiers and slaughters them—all save one who escapes, gathers a new band of outlaws, and murders Ichisuke and his family in their sleep. Honor-bound to avenge his friend’s death, Mokunoshin realizes he’s incapable of killing, setting the stage for a horrific confrontation with the bandits where his future as a samurai will be decided forever.

I’ve read some reviewers complain that the actual swordplay is choreographed and shot almost as an after-thought with jittery shaky-cam coverage obscuring much of the fighting. But that’s the point: Tsukamoto is more interested in the rituals surrounding violence and the psychological aftermath of combat. The result is a decidedly minor key film in his oeuvre that’s nevertheless equally as nihilistic and nasty as anything he’s ever directed, though one can’t help but roll one’s eyes at the sexual violence directed towards Ichisuke’s doomed sister Yu that’s added almost as an afterthought.

Killing plays Wednesday July 24 at the Japan Society's Japan Cuts.  Director Shinya Tsukamoto will be in attendance and will be receiving the festival's Cut Above Award. For more information on the screening (such as the possible release of tickets for the sold out event) go here.
Posted by Steve Kopian at July 22, 2019