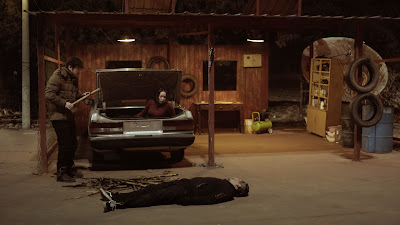 Impossible to summarize easily pitch black comedy thriller takes a little bit to get going but once it gets going it manages to produce both uneasy laughs and chills as everyone's sins of omission or lies comes back to haunt them.

The film is nominally the story of a hotel owner in rural China. Suspecting that his wife is having an affair he decides to kill her and turns to the quack doctor giving him aphrodisiacs  to get him a hit man. When the appointed time comes the plot begins to unravel as nothing is what it seems and no one is who they claim.

Chinese film noir meets the off kilter sensibilities of the Coen Brothers in a film that is continuously shifting gears. Told in chapters the film shifts styles as well as the more or less straight forward film swerves into literal silent comedy territory with black and white bits that are straight out of the Mack Sennett Studio. Why the film shifts in that direction isn't really clear but it does make the film stand out.

I really like the film a great deal. This is a film that doesn't behave as you think it will. A well made gem of a film AN ABSURD ACCIDENT this is the sort of audacious inde film that makes you sit up and take notice- and laugh.

What an absolute cinematic joy and a hidden treasure.

AN ABSURD ACCIDENT is highly recommended when it hits VOD on July 18th
Posted by Steve Kopian at July 14, 2019