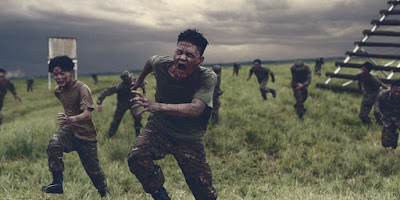 An amusing mix of horror and comedy has a squad of soldiers on a training retreat being ending up in the middle of a zombie plague.

Longtime readers of Unseen Films know that while I like the zombie genre, I am also sick to death of it. The last refuge of an increasing number of lazy filmmakers, the genre has been reduced down to people in bad make up chasing people around for 90 minutes before the end credits roll. There is no logic, no reason, just flesh munching. There is very little thought just the search for cheap scares as the same tropes are repeated over and over again.

By all rights I should be clumping Zombiepura into the crappy zombie film category but surprisingly that isn’t the case. Yes the film is your typical tale of a group of people surround by monsters going to eat them, but the filmmakers spice things up with not only a knowing sense of the genre, but also with real characters that create real situations where we laugh at the silliness of some of it and, most importantly we fear and dread what is going to happen next. We like our heroes and heroines and don’t want them to die.

One of the best films at this year’s NYAFF, Zombiepura is recommended when it plays Saturday night. For tickets and more information go here.
Posted by Steve Kopian at July 11, 2019