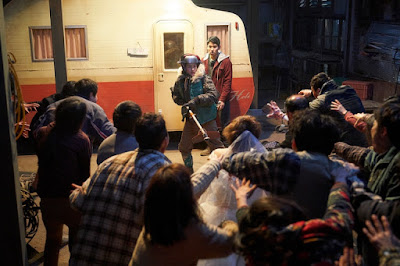 Off kilter zombie comedy has a family who runs a gas station in the middle of nowhere, and scamming everyone as they go, finding themselves in the middle of a zombie apocalypse. The outbreak is due to a new diabetes medicine that turns the users into rabid monsters. The family also ends up taking in a zombie who isn’t that bad.

Better in its parts than as a whole Odd Family is the going to play best for those who are part of the undead army of zombie aficionados. Extremely well done with frequent laughs this is going to delight them and whose ever funny bone they are nibbling at the moment.

For some of us, myself included, this is going to be a good, but largely unremarkable trip to the zombie well. While there have been some great zombie films of late, I’m growing weary with the genre which cannibalizes itself over and over again. While there are some moments the film hits too many typical tropes for my taste. Perhaps it would have worked better had it not run almost a much too long two hours.

Worth a look for the zombie faithful.

ODD FAMILY will play later in July at the Fantasia Fest in Montreal
Posted by Steve Kopian at July 09, 2019