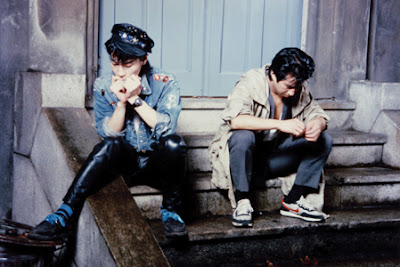 Gather round, little children, and let me tell you the story of the cult Japanese rock musical that could. In 1985 Macoto Tezka—the son of Osamu Tezuka, affectionately known in Japan as the “God of Manga”—met a young musician and TV actor named Haruo Chicada with a unique problem: he had a movie soundtrack but no movie. Inspired the rock operas of The Who, Chicada released an album entitled “The Legend of the Stardust Brothers” about the rise and fall two rival musicians who join forces, become overnight sensations, and imploded almost as quickly.

Tezka, only 23 years old with a handful of 8mm shorts under his belt, immediately agreed to make Chicada’s missing movie. The result was a breathtaking, senses-assaulting blitzkrieg of low-fi DIY filmmaking equally inspired by Brian De Palma’s camp classic Phantom of the Paradise (1974) and early 80s music videos á la Michael Jackson and the Talking Heads. His two lead actors Shingo Kubota and Kan Takagi could sing, but they couldn’t necessarily act, forcing Tezka to rely heavily on montage and rapid-fire editing to direct around their short-comings. “Even if they couldn’t act, as long as they could express themselves in a unique way,” Tezka explained in an interview with The Japan Times, “I knew I could put something together in the cutting room afterward.” The result feels like something storyboarded by his mangaka father with characters bouncing around a plasticine reality—one moment they might dance up a flight of piano key stairs ripped from a 1930s Hollywood musical, the next get into a Looney Tunes chase sequence where falling down a flight of stairs transforms them into anthropomorphized boulders, and the next cower in a record executive’s office lit and shot like it was in the basement of the Tyrell Corporation’s headquarters in Blade Runner (1982).

Here is a film that indulges in every gaudy excess, every obnoxious fashion trend, and every ridiculous hair style of mid 80s pre-economic bubble Japan, complete with a murderer’s row of cameos of iconic Japanese artists like Lupin the 3rd mangaka Monkey Punch, film director Kiyoshi Kurosawa, and puroresu legend Akira Maeda. And it bombed. Spectacularly. Largely forgotten until now with an upcoming Blu-ray release courtesy Third Window Films, the film is an irresistible time capsule of mid-80s Japanese weirdness with a soundtrack that still rocks even today.