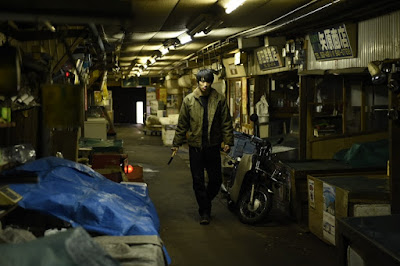 This is purely a place holder. I wanted to simply say that I saw Sabu’s JAM which played at the New York Asian Film Festival, but I don’t know what to think. This uncertain reaction is not what I expected from a Sabu film since every film of his has produced some sort of emotion—even if only in the end when the plot threads came together in an ah ha moment.

Beginning at the end the film follows three people as their lives end up converging in a single moment where, they literally crash into each other. And I really don’t know.

A couple days on I’m still pondering it. I know I should watch the film again but I’m torn, especially since I’ve been told that the film is getting a sequel. Perhaps down the road, linked to another film it will make more sense, or provoke a reaction that I can put into words.

For now I just want to say that I’ve seen the film and full review is coming. Until then here is Nate Hood’s review.
Posted by Steve Kopian at July 12, 2019