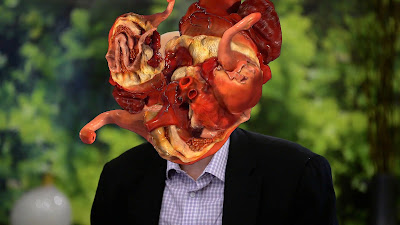 What in the holy hell is Foaming Node?

Stupid question, I know what it is, I’ve seen the film, but what exactly is the film? Fucked up is the first thing that comes to mind. Deeply deeply disturbing is the second. And while neither of those reactions is original, I’ve read a couple reviews in hope of ending the great unease that has filled my soul, it is the only way to describe the film.

A documentary style film, it is little more than members of a cult talking about their beliefs and their interaction with their comatose leader who foams. The foaming produces alterations to the mind and body…

While seemingly straight forward writer director Ian Haig destroys the brains of everyone in the audience by manipulating the images. Faces contort, images within images create monstrous images. The manipulations both run counter to and blend with the testimony of the cult members. Their carefully chosen and quietly spoken words lay the ground work so that we accept what we are seeing without question. Not only do we accept it, we are drawn into it with the result that we are blindsided by what follows.

I am both disturbed and delighted by what Foaming Node does. I love that it provokes a reaction but I hate the feeling it provokes.

IF you want to see a film that will rattle you, see Foaming Node. Anyone wanting a normal film stay far far away.
Posted by Steve Kopian at July 17, 2019