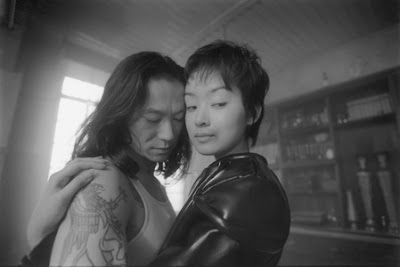 There’s a haunting scene in Shinya Tsukamoto’s Bullet Ballet where two gangs confront each other in an industrial complex late at night. As they fall upon each other, stabbing and smashing, cutting and clubbing, a faulty light somewhere nearby starts flashing wildly, creating a disorienting strobe effect on the carnage. The source of this flicker is never shown, neither is the reason why it suddenly started malfunctioning. It simply exists as a stylistic underlining of the chaos. It is, to use an overly abused phrase, pure cinema. But then, Tsukamoto’s films have always veered towards the unapologetically expressionistic—like the silent directors of the Weimar Republic, he uses images to reflect interior mental states while completely disregarding realism.

Bullet Ballet, then, sees the gradual self-destruction of a commercial director named Goda (Tsukamoto) after discovering his girlfriend unexpectedly killed herself with a gun. Grief-stricken, he embarks on a back alley odyssey through Tokyo’s gang-infested slums seeking a gun of his own with which to end his life. (American audiences unfamiliar with Japan’s strict gun laws might chortle at this premise, but the reality is that firearms, legal or illegal, are nearly impossible for Japanese civilians to own.) His search for a firearm leads him through a host of con artists and criminals until he finally falls into the orbit of a street gang embroiled in a vicious turf war. But by the time he gets his pistol, he’s firmly off the deep end, his psychological fetishism so advanced that he partakes in savage self-flagellating rituals, beating himself with his gun while burning his arms with burning irons to relieve mental stress. Yet in an unique twist inspired by a real life Japanese phenomenon involving “teamsters”—young people with respectable careers leading double lives as violent criminals during the night—Goda compartmentalizes his psychosis during the day, acting the perfect salaryman while visions of bloodshed haunt his thoughts, swelling and festering until they’re ready to pop.

Like Tsukamoto’s best films—Tetsuo: The Iron Man (1989) and Tokyo Fist (1995)—Bullet Ballet is both cultural polemic and gruesome Scorsesian criminal Bildungsroman. But stripped of Scorsese’s Catholicism, all Bullet Ballet sees as it looks upon modern Japan is an abattoir of the soul, sticky with blood, caked with gunpowder. Only a lackluster script juggling too many characters and storylines at once keeps it from standing as one of Tsukamoto’s greatest.

Bullet Ballet plays Thursday as part of Japan Cuts celebration of the work and career of  Shinya Tsukamoto.  For more information and tickets go here
Posted by Steve Kopian at July 22, 2019