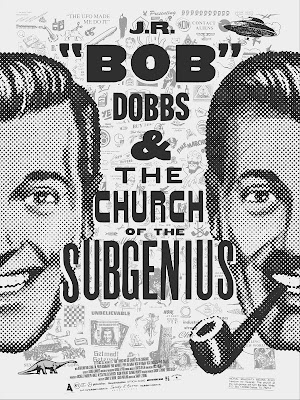 I should probably come clean and say that I have been an outlier of the Church of the SubGenius for decades. While I have not been a dues paying card carrying member I have bought the books and drunk the Kool-Aid while looking for Slack in my own way. I say this at the start so that you may better gauge my absolute delight at this joyous little film.

The film is a portrait of the legendary Church of the Subgenius, the half put on, half serious organization that seeks to help people find Slack through the teachings of the great Bob Dobbs. Told by the people behind the church as well as followers, fans and people who were there when things went down the film is a breezy, often extremely funny film about an organization and way of thinking that has quietly influenced the world over the last 40 plus years. (That last line is true since the Church has had fans from across the pop culture spectrum who have integrated church teaching in their art- as the film reveals). The Church which talks of how the conspiracy of normalcy is out to control us is a haven for non-conformists, who frequently and good naturedly, rebel against the Church (as someone says if there wasn’t a schism is the church the church would create one)

I absolutely love this film which no doubt will become a sacred relic to the Church of the SubGenius. It parts the curtain on an organization I have been a fan of ever since I ran across them in the late 70’s or early 80’s. I watched with a big grin on my face the whole time…

One of the great films at Fantasia and the year. J.R. “Bob” Dobbs and the Church of the SubGenius is highly recommended.
Posted by Steve Kopian at July 20, 2019