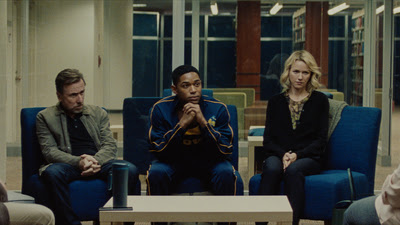 Luce is a movie about high school senior Luce, who was a child soldier in Eritrea, and was adopted by two white parents. They mention that they all went through years of therapy and recovery. He is now a track star, valedictorian, popular, and everyone loves him. Except one of his teachers, Ms. Wilson (played by the always great Octavia Spencer).

One day Ms. Wilson wants to see Luce's mom after school. She tells her that she was disturbed by a paper he wrote, that for his paper, he wrote about a leader who felt violence was necessary. She becomes concerned, given his childhood. She tells Luce's mom that she searched his locker (Luce is unaware), and finds illegal fireworks. (We later find out this isn't the first time she searched a students locker..how is she able to do this?). Luce's mom tells her husband about the paper and fireworks, and they are unsure of how to handle the situation. Do they confront him? or act as though nothing happened? They decide on the second, why? I am not sure.

The rest of the film, is basically a battle of sorts between Ms. Wilson and Luce. We don't know if she is for some reason out to get him, or if she is authentically concerned. Do the parents believe her, or trust their son? Luce constantly feels that he has to live up to everyone's expectations of him. Who is his true self? Is he the all American perfect student everyone thinks he is, or is he hiding something?

The film deals with many topics; race, class, mental health, sexual assault, but it only touches on all of these topics briefly. I kept expecting something big to happen or come out of it. It seems like the director leaves it up to the audience to decide.

I had high expectations going into this film, I heard praise of it from pre-screenings, and it already has a 93% on Rotten Tomatoes, however, I'm not really sure how I felt about it. I think I was underwhelmed. I didn't hate it, but I expected more. However, it is the kind of movie that I am still pondering hours later.
Posted by Steve Kopian at July 29, 2019