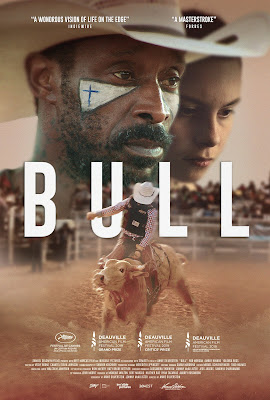 In BULL a young woman breaks into a neighbors house after she exchanges words with the neighbor about the death of one of his hens which was killed by her dog. Bringing along a group of friends they party and trash the house, stealing all his pain meds. There is a problem there in that he is on the rodeo circuit and he needs them to get through the day. Making a deal with the girl’s grandmother- he won’t press charges if she cleans up the mess. The two begin to slowly bond over time.

Nice little slice of life BULL scores in several ways. First it has a lived in quality. In a way it feels more like a documentary of a life well lived. These are real people and real places. They carry a weight that most narrative films never achieve. If director Annie Silverstein were to actually cut the film slightly differently she could probably pass this off as a documentary. It is a grand achievement.

Another way that the film scores in that there are no good guys or bad guys, there is only people. We see all sides to pretty much every character with the result they are much more real. These are people we might know. More importantly the cast allows us to see behind their eyes and come to understand why they are doing what they are doing. We understand their choices or more importantly their lack of them and so we embrace them more than hate them .

For me BULL is hard film to write on. It is so easy to write about events and their meaning but this is a film that is ultimately about emotions, of things not said, and quiet moments. It is a film that puts you in a place where you feel things and when you are talking about emotion it is always better to experience than discuss. As such Bull is a film you need to see. Don’t read on it- just go see it and feel what it makes you feel- the result will make you better for it.