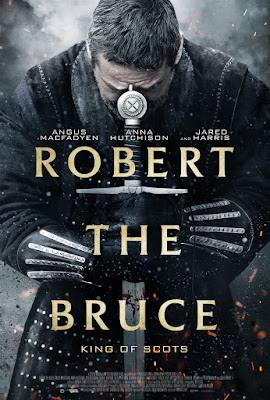 Sequel, of sorts, to the Oscar wining BRAVEHEART written by and starring Angus Macfadyen who played Robert in the earlier film. Picking up after the death of William Wallace when Robert was an outlaw for killing John Comyn in a church after Comyn attacked him (the history is slightly different). Robert is wounded and falls in with a peasant woman and her children who inspire him to return to the fight  against England.

Gorgeous to look at historical drama is a really messy film. While I really love pretty much everything about the film, I am not a particular fan of the script which is just all over the place.

The major problem with the script is that it makes Robert a kind of a secondary character. The film focuses on everyone other than him. That's all well and good but the film isn't called "The Peasant Woman who Saved Robert The Bruce" so I kept waiting for him to actually do something, like show up, or when he was on the screen to say something. For a good chunk of the film he simply seems to wander about looking forlorn. He's lost the will to fight...and then he gets the will from hanging out with this woman and her family, really? Even if its true (which considering other changes to the story means it's not true) it just doesn't play well.

The other problem is the time frame of this film, which would seem to indicate that the events in the film took place over an extended period of time say months or more, however if my reading of the history is right it's actually a matter of weeks.

I was majorly disappointed.

While the film is worth a look for those who like historical dramas and can forgive the script problems, I would rather go see OUTLAW KING with Chris Pine again
Posted by Steve Kopian at April 20, 2020