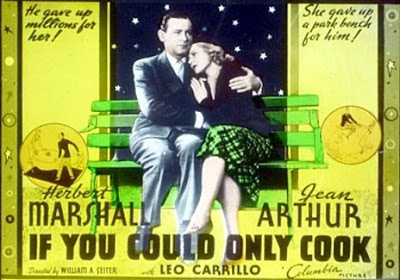 Everything about William A. Seiter’s If You Could Only Cook should’ve worked. The plot is the kind of madcap nonsense only Depression-era screwball comedies could muster. After getting vetoed by his board of directors over the creative future of his company, Jim Buchanan, wealthy president of a car manufacturer, goes on the lam the week before his marriage to a shrewish, gold-digging aristocrat. While slumming, he meets an unemployed young woman named Joan Hawthorne who mistakes him for an unemployed, down-on-his-luck bum and takes pity on him, inviting him into a scheme to pose as husband and wife to apply for a joint butler/cook position at a nearby mansion. Disillusioned, Jim goes along with it and the two find themselves in the employ of Michael Rossini, an Italian bootlegger. To his surprise Jim takes a liking to his work, even running out at night to get butlering tips from his actual butler. Even more surprisingly, he finds himself drawn to Joan. After a series of misunderstandings and mistaken identities, Joan gets arrested, Rossini puts out a mob hit on Jim, and everything ends with an impromptu kidnapping with the bootleggers ultimately helping Jim get Joan to confess her love for him.

Additionally, the film had a dynamite leading couple with the reserved yet amiable British star Herbert Marshall as Jim and screwball comedy legend Jean Arthur as Joan. (Though Arthur had been making movies since the silent era, it was only until her breakthrough role in 1934’s Whirlpool that she came into her own as a leading lady. Though it didn’t require the same comedy chops as John Ford’s The Whole Town’s Talking [1935], her role as Joan demonstrated her effortless knack as a comedienne.) It also stars a scene-stealing Lionel Stander as Rossini’s second-in-command Flash, a nosey wiseguy who sounds a little like if Harvey Fierstein crawled down a Brooklyn cabbie’s throat.

But for its delicious plot and wonderful cast, If You Could Only Cook fails to come together due to Seiter’s flat, lifeless direction. Though Seiter occasionally made decent films—his Laurel and Hardy vehicle Sons of the Desert (1933) is a legit all-timer—he was not himself a particularly compelling filmmaker. His compositions are disinterested, his scenes inert, and his handling of his leading couple surprisingly dull. The one thing a screwball shouldn’t be is boring.
Posted by Steve Kopian at April 28, 2020