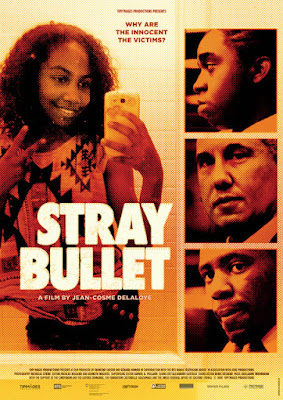 This is the story of the aftermath of a the death of Genesis Rincon. The 12 year old girl was killed by a stray bullet on a street in Patterson New Jersey. Following the case over three years we watch as the families of the the victim and the accused deal with the long painful aftermath of a tragic act.

This is a sad film where no one wins. A not your typical look at events, this is a film that gets beyond simple soundbites to show us a hell of a lot more than you typically see in film such as this. Normally the lines of events are clearly spelled out but things are not so clear here. This isn't just about one tragic death, but something larger. The dangerousness of living in Patterson is made clear. We come to understand the fear that everyone has. We also see how fucked up the justice system is. The three suspects are in jail on the impossible to ever raise three million dollar cash bail. As one of the defense attorneys says, the bail is so great that no one in the court room could ever have raised it. On top of that the suspects are left to rot in jail for over two years waiting for the trial to start for no good reason. It's so long in fact that Genesis' father ponders if the defendants are even guilty since the prosecution doesn't seem to want to try the case.

I like that the film doesnt take the expect route to the end because, while it may make the film difficult to get a handle on (the film doesn't take a side and is sympathetic to everyone on all sides), it gives as a more to think about than a conventional telling with a point of view favoring one side. Things are very much not black and white and as a result we bleed for the family of the young girl as well as the young men on trial (trust me there are two "oh shit" moments, one when something is revealed and one when we see how it ends)

I really liked this film a great deal and recommend it to anyone seeking a challenging look at the criminal justice system.

If you are curious about defense attorney Harley Breite you will want to track down director Jean-Cosme Delaloye's HARLEY which screened as part of this year's on-line Tribeca Film Festival. HARLEY is a more focused look at the attorney, his interest in MMA and his love life.
Posted by Steve Kopian at April 25, 2020