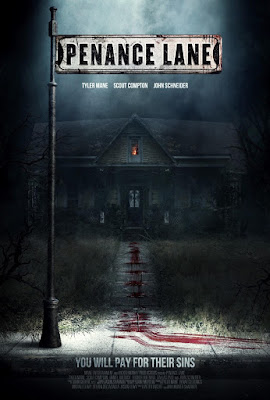 Crimson Matthews has just been released from prison. In need of a job and a place to stay he takes a job fixing up a home on Penance Lane. He is unaware that several years before that the men behind a notorious robbery had met at the house to split the money. The split never happened when something came out of the walls and tore all but one of the men apart. Crimson is unaware of what he is walking into...

This film surprised me in all the best possible way. Agreeing to review this film because the Covid19 stuff changed my planned coverage of the Tribeca Film Festival I was scrambling to find things to fill slots. Knowing that the person sending me the film usually sends me films that are at least interesting I said I would take a look at the film, fully expecting it to be an enjoyable  goof.

Instead I found Penance Lane to be a surprising good thriller. While the answers of what is going on is not supernatural (sorry if that's a spoiler) we are so much better for it. Logic and reason stay firmly within the realm of believability and as a result we end up with more tension than we would have with a monster on the lose.  Trust me, all you'll need to is watch the opening sequence where the bad guys try to hideout and you'll be hooked.

The lack of supernatural also works in the film's favor in that it allows the cast (Tyler Mane, Scout Taylor-Compton, John Schnieder and the rest) to give better performances. They have to keep things real so there is no going over the top. I bought what was happening completely which isn't always the case with monster movies. The cast is so good you'll wonder why they aren't working on bigger budget films.

PENANCE LANE is a small hidden gem. It is an unexpected joy that I have been recommending it since I saw it a couple weeks back. Now that it is out on home video I can recommend it to you as well.
Posted by Steve Kopian at April 21, 2020